Pushbacks and lack of accountability at the Greek-Turkish borders

Amid escalating geopolitical tension with Turkey, in March 2020 the Greek authorities announced a hardline approach towards asylum seekers attempting to cross its land and sea borders with Turkey. The framing of cross-border movements as a ‘threat’ to the country’s national security served to justify a derogation from the human rights standards and procedural guarantees that are granted to people seeking protection under EU law. Since then, a pattern of systematic pushbacks at the border and informal returns represents the most visible expression of this hardening of border policies at the EU’s south-eastern borders.

This paper analyses the negative impact of this heavily securitised approach on asylum seekers’ fundamental rights, in particular its implications for the right to asylum that underpins the Common European Asylum System (CEAS).

The paper also reflects on the limits and ambiguities that have characterised the EU’s response to the situation at the Greek-Turkish borders, focusing on the role and responsibilities of the Frontex Agency. It underlines the need for the EU to remedy the shortcomings in existing accountability mechanisms, to guarantee effective remedies for victims of fundamental rights violations at the border. Establishing a sustainable human- rights-compliant management of migration in the eastern Mediterranean also requires that the EU move away from its focus on containing and restricting asylum seekers’ mobility – a focus that has characterised cooperation on migration and asylum with Turkey within the framework of the 2016 EU-Turkey Statement. 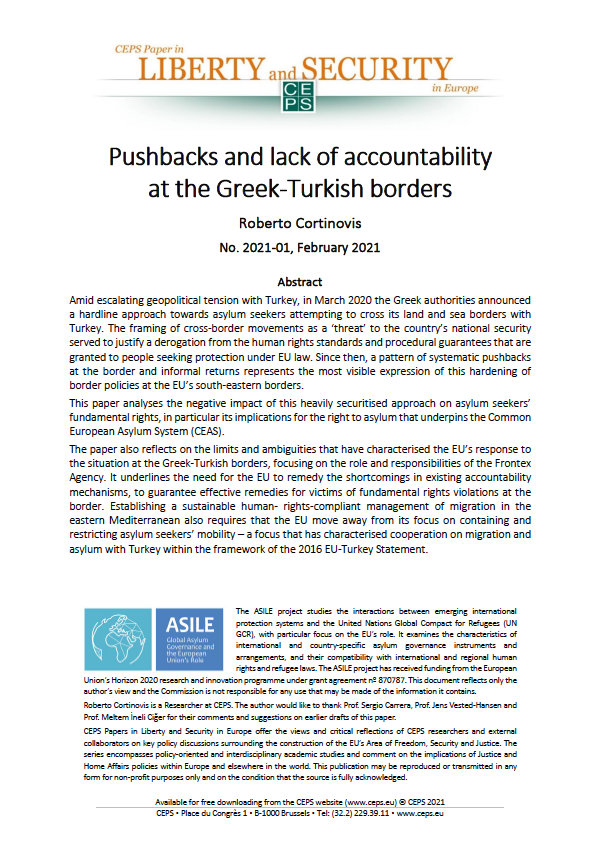